One item on my long list of things to improve was to ensure I could hear the VHF from the helm.  I have an aversion to cutting or drilling holes in a boat, and will do whatever I can to solve a problem without doing so. (drilling holes I mean!)   In this case, the solution was fairly easy - mount the speaker in the lid of an existing access cover.
The hole was cut using a flywheel-type adjustable circle cutter on a drill press.   I clamped two pieces of MDF in the drillpress (stacked) and cut a hole  equal to the cover plate's diameter through the first piece.  Removing the cut out created a fixture in which the cover could be placed, already centred under the drill press chuck.  I then re-adjusted the cutter to the correct diameter for the speaker hole, firmly clamped the cover in its fixture, then slowly bored the second, smaller hole through the cover.    Not for the faint-hearted, but it worked fine, and any lack of concentricty is not noticeable..
The sound  is very loud and clear, the ICOM M506 VHF has plenty of power to drive this inexpensive Polyplanar speaker. 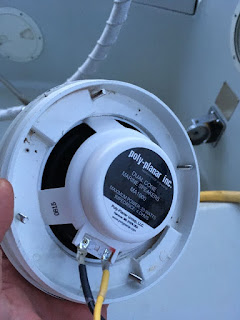 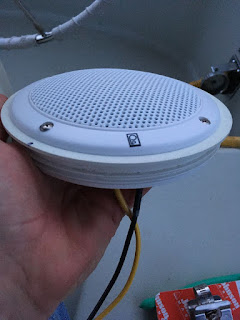 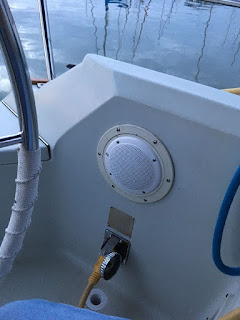 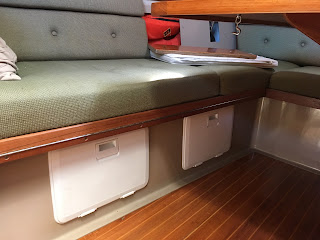 A 9600 lb racer-cruiser has limited stowage for even short cruises with more than 2 people.
One of the things I dislike about the 33-2 is the way the port side fold-out double berth impedes access to the only large stowage area in the boat.  In the pretty drawings, they don't show that the under the starboard settee resides only the fresh water tank, under the V-berth resides only the holding tank, and under half of the quarter berth resides one small locker and two batteries in a difficult to access locker.     The port settee is available for stowage, BUT the drop leaf table must be dropped, the seat cushions removed, and the berth extension folded out before you can lift the covers to access the stowage.  A nuisance!   Also, it's all one big compartment so the reserve beer and wine can crush the reserve potato chips.     (Apparently the water tank was moved to this side on later production years.)

I wanted more convenient access to this settee locker, so I decided to add some hatches as you see in the photo.  I chose Tempress 1115 (11" X 15") slam hatches.  There are others, but these are:   "as functional as they are stylish"

See below for photos, fairly self explanatory.  I used a bimetal holesaw, and my fein multimaster with a circular bimetal blade.   Next step will be a simple barrier between the two compartments.

In future the chips will meet the beer only at the time and place of my choosing! 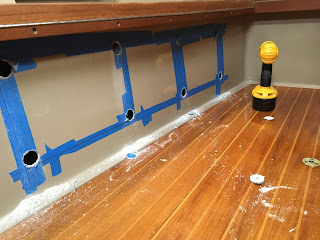 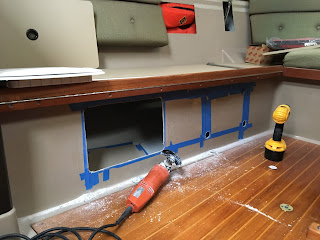 The photo below is of the stock deck organizer for the C&C 33 mkii.   Any idea who manufactured it and if parts are available?  I am looking to add another sheave to this if possible, convert to 3 on 3 from 2 on 3. 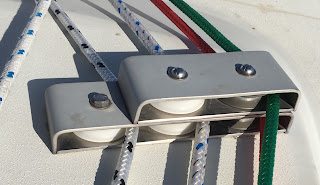 Update:
Was emailed by Tom S with the following information.  Thanks! 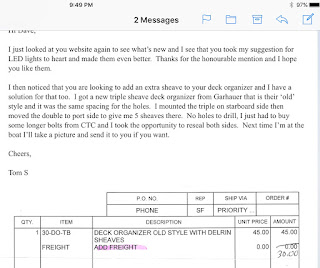 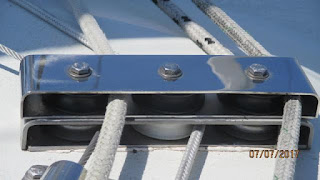 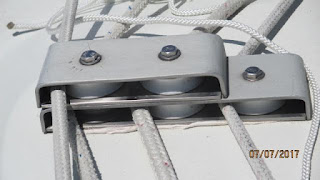 The SJ 16/2 cable used to connect the bow and stern running lights in Windstar has not stood the test of time.  This cable is intended as portable cordage, and has rubber-insulated conductors inside a neoprene jacket.  The conductors'  insulation is crumbling and just waiting to create a short and tripped breaker. The prince of darkness lurks...  Will post pics, it's toast, and it's now gone.

The PVC insulation used throughout the rest of the boat is fine, it's just the length from the light, through the pulpit/pushpit to the bullet connectors below deck, where the lights connect to the harness.  (the cables in the mast were fine also, except for some wear and tear at the base of the mast.   I rewired the mast in '17 anyway.)

The neoprene cable jacket is likely in much better condition than the conductors' insulation, therefore the condition of the conductors is not evident when simply inspecting the cable from the outside.  Check the conductors themselves where they are exposed. 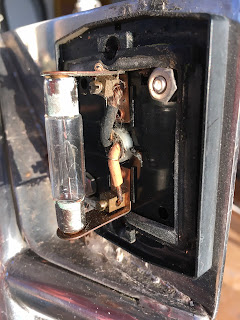 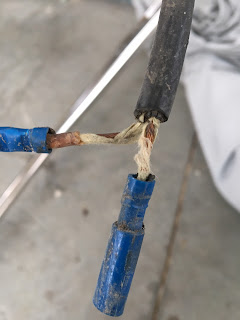 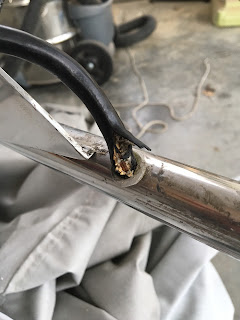 I have already replaced the mast-mounted lighting with MarineBeam units - these are Hella-esque designs, made in China.  Am also considering replacing the tired OE Aqua Signal 25 port starboard and stern running lights with LED.   This would reduce power consumption from 30w to as low as 4.5 watts.

Unfortunately Aqua Signal does not make a direct LED replacement for the 25 series.  They have two series' (33 and 34 IIRC)  with very different proportions that have earned a few poor user ratings for quality so I ruled those out.   They do have a replacement for their series 40 which has the best specs of the lot but is, IMO, too large for Windstar.  At $200US each, they are expensive as well.

Hella makes (in New Zealand!) what appears to be very nice product, with excellent specs.  A bit larger than the AS 25, they are at least close in size, though still expensive at US$159.

Marinebeam offer what appear to be Hella tributes, made in China, at lower prices.   The two units I ordered for the mast were of decent quality (one had a significant cosmetic defect and I installed it anyway, after having been credited the purchase price.   Marinebeam was easy to deal with.)    They also offer an economy series, which is basically a series 25 clone with their replacement 3.2 watt bulb.  Those replacement bulbs are the cheapest option, and if ordered in the appropriate colour, (red and green) will significantly improve visible range to 2nm.

Nearly as cheap as LED bulbs alone are the Victory fixtures.  Victory is the house brand of a Canadian distributor in Vancouver.  I had a quick look at these a few weeks back, and noticed that the light sources were simple, indicator light style LEDs.   Victory publishes no specs at all online so I am not sure what the range or power consumption would be, but they are very inexpensive, made in China, probably by convicts.

I found it interesting that the Aqua Signal 25 is rated for 2nm visbility in white, and the red and green lights are rated  only 1nm, due to the white lamp being filtered by the coloured lens.   Appropriately-coloured LED sources do not suffer from this output reduction and there is no difference in claimed visibility between the different colours.   This is good to know if buying LED replacement bulbs -  buy the correct colour, not white!

Here is a summary of the options available, sorry the links won't work.   Just google.  I included the AS 25 as a benchmark and colour-coded the specs in comparison.  Too bad there isn't a direct LED retrofit with sealed optics and COB, but at least there are a range of options.