Who made these cleats?

Looking to have one of my wing halyards terminate or at least be cleat-able at the mast, and would like to match the existing hardware.
Does anyone know who made these and whether they are still available?   I admit that I'm undecided about this style of cleat for a halyard. 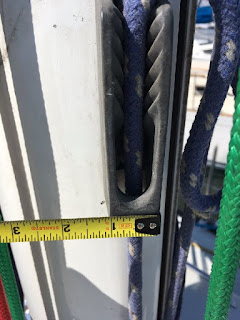 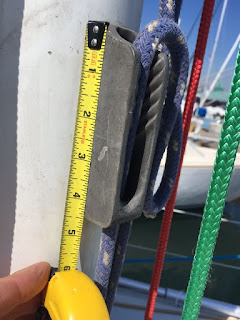 How to drain the ice box?

Here is a photo of Windstar's ice box drain pump.  It is a Beckson SiphonMate hand pump, mounted in a bracket below  counter.   The inlet is connected to the ice box drain, the outlet to a length of hose which is not connected to anything, but  is long enough to reach the sink. 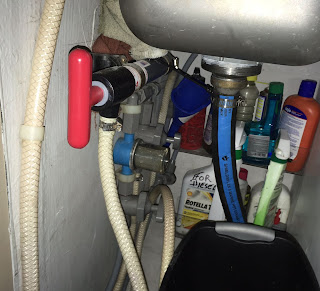 When Windstar showed up, the self priming SiphonMate was not.  Replacing it with a new one solved the problem.   It is a simple, effective approach, however I would prefer a drain that was direct plumbed into an overboard drain rather than relying on a coiled length of hose.   Pretty low on the list of issues, and mainly,  I post this for those who would like to see the stock installation of the SiphonMate.

A recent discussion on the C&C mailing list was started by an owner with a blocked ice box drain hose, which left me puzzled.  Drain where?  The bilge?  Nasty.  Turns out there were others with the same plumbing, (a prior owners' fix?) and others who had addressed this in different ways.

Below is Lee's solution, repurposing a seawater pump and faucet.   I expect the seawater pump was a dealer option.   (Windstar has only one footpump, from the freshwater tank.)

"I have no need to have lake water at the sink so we repurposed the pump to drain the ice box. The hose goes from bottom of ice box to foot pump at foot of sink. This pump used to pull lake water in an dispense in the sink." 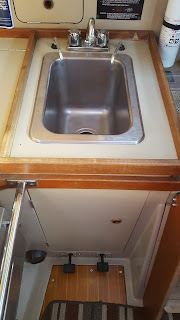