See below for photos of mid-80s C&C keel deterioration.  This appears to occur where winters are freezing cold and boats are stored on land.   Seems as though water migrates down the keelbolt into the lead casting and freezes each winter, incrementally enlarging any voids or cavities each seasonal cycle.  These photos were shot in a short stroll around one marina yard, near Toronto. 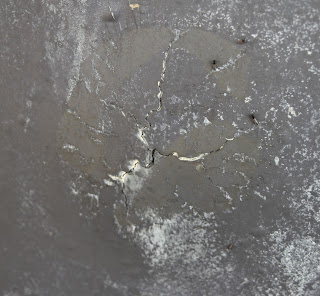 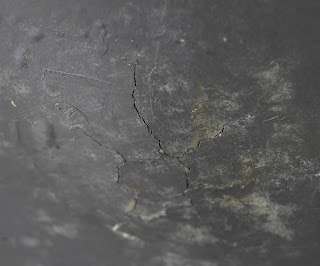 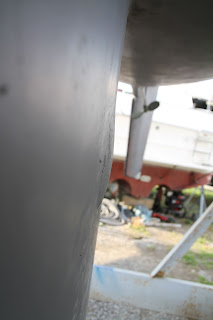 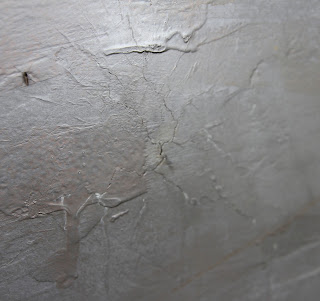 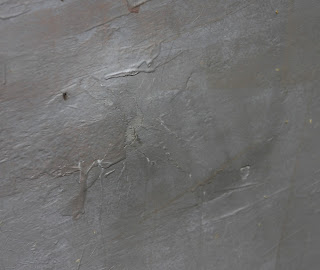 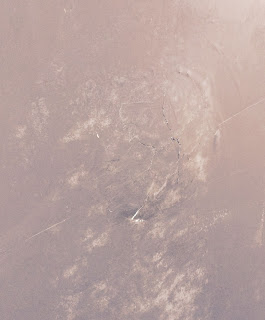 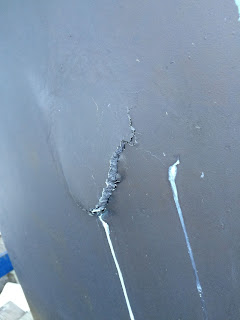 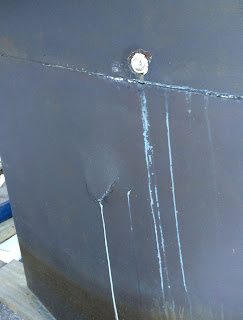 As mentioned in a previous thread, I have recently refitted Windstar with a SeatalkNG network, and a variety of Raymarine instruments.   Was pleased to hear that they have released several firmware updates,  and was looking forward to installing, in the hope that my autopilot might behave a bit better.

What I was surprised to learn, and what is not mentioned in any of my Raymarine manuals (which encourage you  to check online for firmware updates) is that you cannot update Raymarine firmware without a Raymarine chartplotter!  Kinda like being unable to update your iphone without buying a $2000 MacBook, and they didn't tell you before you buy...

I contacted Raymarine and they offered to send a tech (at my expense) to do the update, or to do it for free if I remove all of the hardware and ship it to their location.   Polite, but absurd.

While updating firmware is encouraged in all of the Raymarine documentation I have, how is not mentioned at all.

The closed shop, proprietary approach is part of Raymarine's strategy, and while the proprietary SeatalkNG cabling scheme is kind of irritating, at least you know what you are getting.  (like Apple's lightning cable) I don't like it but I get it, and I was fully aware of what I bought.  The "hey all you need is one of our great chartplotters" trap is is simply unethical, and if its a calculated strategy, sleazy.

As I explore the options available in marine electronics, I have realized that dinosaurs do walk the earth.   My cool Raymarine p70 display is really nothing more than a rugged, dumbed-down low end smart phone with one simple app and a senior-friendly interface.  One simple app that I can't update unless I drop two grand on an obsolete toy I don't want, or am willing to periodically disassemble/ship/reassemble my boat's network.

This stuff is all software nowadays, and software updates have been a part of electronics ownership for decades.   This is something that responsible, litigation-fearing manufacturers do - and must do - to ensure their products are safe and bug-free. (Like your car, for example.)  Simrad/Navico/Garmin all update through their chartplotters - PLUS offer a NMEA 2000 to PC interface cable for those who require one.

Electronics - what to do?

Marine Electronics - What to do?

Update - installed the vYacht wifi router and was able to get nmea data transmitted to my iPad - very cool.   I now have 3 redundant multifunction displays (laptop and two iPads) 3 chart plotter apps (opencpn, inavx, and NavionicsHD.) and 3 redundant gps sources, (garmin x19, garmin get Bluetooth glo, and iPad on board- is suppose my phone too.... ).  as well as a world of apps that are constantly evolving, all integrated with display devices I already own, and a standardized data set. 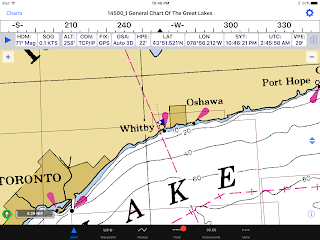 I started sailing my own boat circa 1990 with paper charts, a few books and after having taken at least one course on piloting (might have been two).  This was a skill taken quite seriously by all sailors at the time and was a very cool and satisfying part of the experience.  In fact, the challenge added some richness and a sense of adventure to sailing, which has been lost with the advent of inexpensive GPS and chart-plotter technologies.   While I do miss the satisfaction of being sheepishly consulted mid-lake by lost power boaters, I certainly wouldn't go back.   I do I like knowing exactly where i am and how fast I am going.
When we bought Windstar in 2014, she was equipped with original, 1980s vintage B&G instruments, which were well made and still working fine.   She did not have an autopilot, and that quest resulted in an electronics refit spree which now includes:
I had original contemplated the addition of a Raymarine chartplotter but was not ready to choose the particular model.   There was no rush anyway, as I had two ipads (one with GPS) , NavionicsHD.   To enable the non-GPS ipad I acquired a:
This gave me three GPS sources, two chartplotters and most of the functionality I wanted.  I bought two Edson pedestal arms, one pod for same (thanks to a kind cnc lister) and a lifeproof case, bracket and ram mount.  I added a Bluesea USB charger to the electrical panel, and a RAM ball at the chart table.   The iPad can be easily moved from nav station to helm.


The good:  it works.  I have no issues with screen brightness (it's under the bimini)
The bad:  one needs to be mindful of the ipad chartplotter's state of charge, and that it is not integrated with the network, and therefore cannot use the Garmin X19 antenna, nor can it drive waypoints to the autopilot.
In practice, none of this has been a big deal  given how I use the boat, but the underexploited potential bothers me.   So, I decided to buy a gateway, enabling tablets and PCs to connect to the n2k bus.   What was recommended was the:
This is cool, and after a being tortured by an old laptop and Windows 7 bugs, I can now run a laptop-based chartplotter, instruments, etc.   I can also view all of the devices on the bus, check their firmware versions etc.    What I did not anticipate, was that the iPad could not be made to connect to the network via USB.  This is not true of other tablets.   So, to use the iPad I need wifi, and have ordered and await a:
This was not the most expensive router out there, but it is proven to work with the iPad.   As I research this whole area, it is clear advancements are being made at a rapid pace, and I expect some further evolution.

In the end, decisions will need to be made about a single OS, and a single chartplotter app, where today I have 3.

Would a chartplotter/MFD have been a better approach?

Certainly, it would have been simpler to integrate, though more costly to install.  Until recently I was considering a Raymarine unit.  To date I have used both ipads with Navionics, one with its internal GPS, and one with the bluetooth-connected garmin GLO.   Both are very accurate.  I have connected an old laptop running OPENCPN to the network, and it appears to work fine.  I am about to integrate the ipads through wifi.   All of this  for much less money than the installed (hardware) cost of a chartplotter.  (I can't bring myself to call it a multi-function display, because compared to an android tablet or iPad, it simply isn't one.)

The more I learn, the more convinced I am that disruptive digital technologies are knocking hard at the door of the old boys club of electronics manufacturers, and that a chart-plotter bought today will be obsolete very soon indeed.  For me, it already is.

Last week Windstar developed a noisy exhaust note, not unlike an unmuffled motor cycle engine.   After a minute or two, and some higher RPMs, it would settle down to its usual quiet gurgle.   Obviously this was an issue with an intermittent absence of cooling water, but why?   I checked underway and the water pump was turning, its hose seemed pressurized.  I also checked the water strainer (as best I could underway) and clearly water was being pulled through.   This left the mixing elbow and the heat exchanger to consider.
I read over the very well-written shop manual, and went back at the boat where I disconnected the short hose between the heat exchanger and the mixing elbow, connected a length of 5/8" heater hose to the mixing elbow, and blew through it just to check for resistance.  The pleasant gurgle flashed me back to high school, and the ease of blowing showed that the passages were free of serious restrictions.   I put the hose on the elbow exiting the heat exchanger, and started the engine.  No water, checked the water pump and noticed it was now not turning.    Tightened the belt and problem solved.
I had set it quite loose and it worked fine all season, only now getting glazed to the point that it slipped at low rpm or until it got warm.  I had dismissed the most likely source of trouble - the pump - because I service it every year, and because I had assumed any problem would involved a completely failed impeller.      Anyway, lesson learned...or probably not.   But, that's not the point...  I found some other stuff.

First Issue:
The 33-2 has its raw water strainer mounted in such a way that it cannot be easily checked or cleaned.   See the photo below where I managed to crop out the heater hoses above, but, in order to lift and remove the strainer basket, it was necessary to remove the coolant reservoir, by sliding it upward off its bracket, but in order to that, it was necessary to unscrew the two P clamps securing the hot water hoses.  (you see those in the photo below) 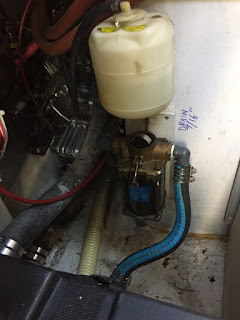 The solution (below) is simply to move the coolant reservoir bracket to starboard, and move the coolant hose p-brackets upward slightly.   There was enough play in the hoses that this was no problem. 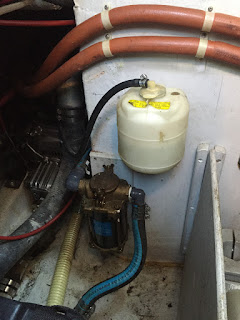 Second issue:
When removing the hose connecting the heat exchanger to the mixing elbow, the small elbow/fitting on the heat exchanger came off in my hand, despite what appeared to be a securing set-screw holding it in place.   See below. 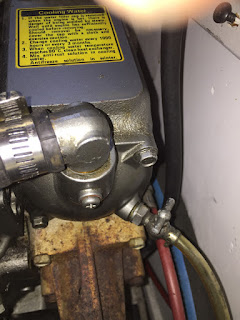 That screw (the Philips head, clearly visible) engages a groove in the elbow and this holds it and its sealing o ring in place, allowing a secure seal with 360 degrees of rotation.   On mine, the screw was pitted and flush with the bore, and did not penetrate into its receiving groove in the fitting.   Over time it had eroded or corroded, had become effectively shorter and no longer secured the elbow.   In the photo above, if you grabbed that elbow and pulled hard, straight up, the elbow  would lift out of its bore.   When running, coolant pressure is not adequate (I think) to overcome the tension placed on the joint by the hose, however the screw obviously needs replacement.  Yours probably does too.