Another candle lit, the spinnaker pole rebuild triggered an investigation into shock cord.

It's not easy for the novice to tell good from bad.  What I managed to learn was that a dacron cover has superior life to nylon and is one of the indicators of a superior product, as is the amount of elongation that the product will permit.  Try it.  Cheap stuff does not stretch as far as the better stuff, and feels quite different.  OK, not exactly the definitive guide to things Bungee, but it's a start.


Cut it, terminate it.

To cut it, tape first with masking tape then use a hot knife.  I bought a soldering gun with a cutting tip on kijiji, and it works well enough.

To terminate, use stainless hog rings and the appropriate crimp pliers.  Was not able to find these easily in Toronto, but in fishing communities where lobster traps are used and maintained they are commonplace, as are the better grades of shock cord.

Easy.   All the right stuff is in the photo below, followed by a shot of crimped hog rings on the original shock cord. 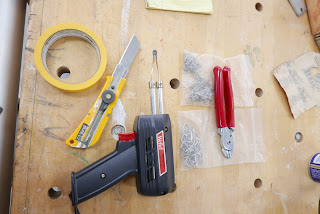 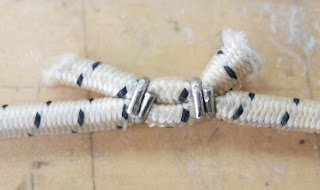 When I dismantled the spinnaker pole and looked closely at the original cord, I could see a construction quite different than I was used to seeing.  See below.   The old stuff, (white) with two layers of braid looks as though it would have greater ultimate strength   and perhaps a more specific extended length than the new stuff.  the rubber cores are different as well.  Though obviously expired, it had not failed in use.  I expect the newer stuff would have snapped.  Perhaps this older style material still exists? 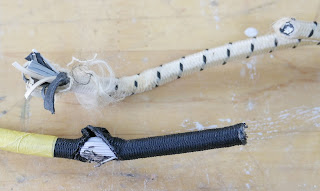